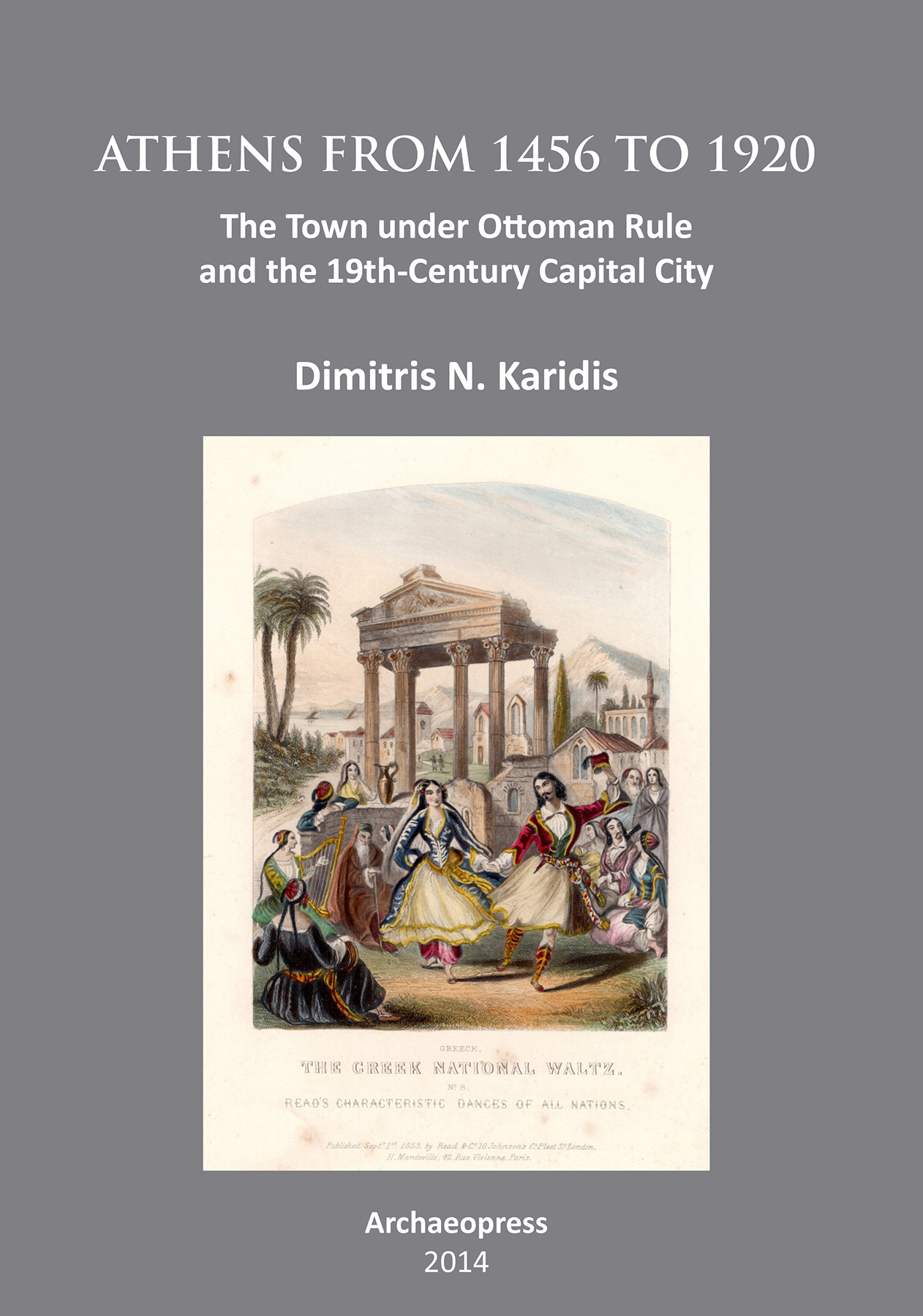 Illustrated throughout in black and white

The Town under Ottoman Rule and the 19th-Century Capital City

Architectural and urban analysis of Athens between 1456 and 1920 discloses the metamorphosis of a town to a city, experienced as an invigorating adventure through the meandering routes of history.

Few people are aware that shortly after 1456, when Athens yielded without fighting to the bitter end, she had become one of the bigger Balkan towns within the Ottoman Empire. The limited area confined within the boundaries of the late Roman fortification walls soon developed into a town of thirty-six mahalles. A thorough analysis of the town/country relationship within the Ottoman feudal system of production in general, and as related to Athens in particular, reveals the dynamic conditions of urban development. Athens shared many of the characteristics of prosperity based on specific modes of appropriation of surpluses and patterns of division of labour between town and countryside. Strange though it might seem, it was only after the middle of the 17th century, when land-tenure conditions changed and Athens was heading towards decline, that an ‘Ottoman’ character as such could be detected in its built environment, although Christians still strongly outnumbered Muslim citizens. That being so, the presence at that time in Athens of representatives of the European Enlightenment, hypnotized by the myth of its artistic and cultural treasures, did not affect the general conditions of development. In the 1830s, Athens, by that time a provincial town of secondary importance, was ‘ordered’ to stride from feudalism to capitalism, to transform itself into a modern capital city of a new-born state.

The shift from a small town under Ottoman rule to the modern city of the Hellenic Kingdom implied the quick transformation of belonging to a community (understood in terms of sharing common cultural characteristics) to a sense of being a member of a society (understood as an institution, as an externality demanding obedience). The amorphous masses of the medieval quarters that had arranged themselves so that unity within variety was established, where each particular architectural entity retained its meaning in so far as it was experienced as part of the whole urban fabric, had to give way to the early 19th-century planning environment, conceived more or less as a series of autonomous architectural identities understood only within a specific urban complex. It was not easy for Athens to cross the ‘line’ in 1834. The rejection of the first plan should not be naively understood as an urban restructuring triggering the virulent dissent of those Athenian landowners who detected threats to their vested interests. A violent break with the past was necessary so that new compositional stratagems could be implemented. But ever since Athens became a capital city, the pendulum of its history swung dramatically between tradition and modernism, not least because nationalism kept propagating an idealistic vision of an historical continuum that ran from the glorious ancient past down to the euphoria of the modern Greek state. Although Athens did make steady steps towards becoming a ‘modern’, ‘European-like’ city, comprehensive planning and centralized control of public works, as they had been essayed in central and western European cities in the second half of the 19th century, were totally incompatible with the build-as-you-please practice foisted on the capital city of Greece. Architectural and urban analysis of Athens between 1456 and 1920 discloses the metamorphosis of a town to a city, experienced as an invigorating adventure through the meandering routes of history. This is what this book is about.

Part One: Athens under Ottoman rule ;

Introduction to Part One: The town-country relationship within the Ottoman feudal system ;
- Urban development during the apogee of Ottoman power ;
- Ibn Khaldun, Naima and the ‘Circle of Equity’ ;
- Signs of deepening malaise. ;

Chapter Two: The physical aspects of development in Ottoman Athens ;
- The town expands under the Ottomans, contrary to what some historians believe(d) ;
- The passage from a small town to a larger urban entity ;
- The urban quarters (‘mahalles’) and parishes: aspects of social and functional integration and segregation ;
- Concrning the Fethiye Cami ;
- A visit to the Bazaar: daily, weekly and yearly market activity ;

Introduction to Part Two: The making of a new state – from tradition to modernity: Oriental versus Western life styles ;
- The ambitious national irredenta ;
- The formative years under the reign of King Otto: the slow process of feudal dissolution and the steady steps towards a capitalist economy ;
- Planning the Greek towns ;

Chapter Three: The adventures of the new city plan ;
- Time for a new plan in Athens ;
- Reading the geometry of the Kleanthes-Schaubert Plan ;
- The Plan is rejected: Leo von Klenze steps in ;
- Karl-Friedrich Schinkel offers advice on the layout of the new Athens Plan ;

Chapter Four: The process of social division of space between 1830 and 1920: the search for urban identity ;
- Athens is growing. the seminal forms of social segregation ;
- Domestic architectural forms and the social division of space ;
- The production of the built environment: the laissez-faire (or, ‘build-as-you-please’) attitude in planning ;
- Public space acquires its own identity ;
- Athens ‘appears’ to be a modern city: E.Hébrard, L.Hoffmann and Th.Mawson offer advice on the city plan ;
- Walikng in Athens in the company of ‘Thomas Hayton Mawson from London and Lancaster’ ;
- In the absence of Th.Mawson, we stand contemplating his plan ;