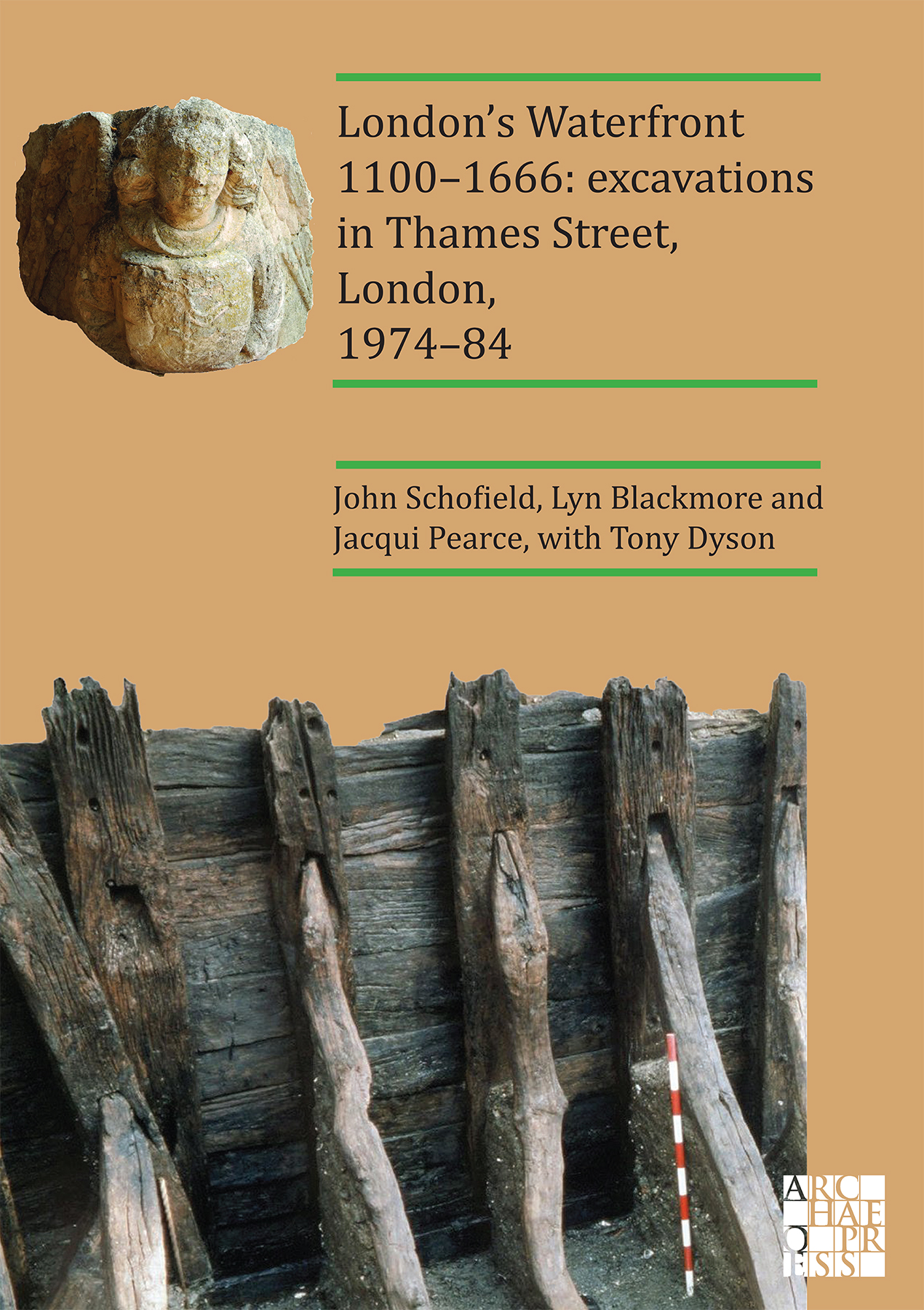 This book presents and celebrates the mile-long Thames Street in the City of London and the land south of it to the River Thames as an archaeological asset. Four Museum of London excavations of 1974–84 are presented: Swan Lane, Seal House, New Fresh Wharf and Billingsgate Lorry Park. Here the findings of the period 1100–1666 are presented.

London’s Waterfront 1100–1666: excavations in Thames Street, London, 1974–84 presents and celebrates the mile-long Thames Street in the City of London and the land south of it to the River Thames as an archaeological asset. The argument is based on the reporting of four excavations of 1974–84 by the Museum of London near the north end of London Bridge: Swan Lane, Seal House, New Fresh Wharf and Billingsgate Lorry Park. Here the findings of the period 1100–1666 are presented. Buildings and property development on sixteen properties south of Thames Street, on land reclaimed in many stages since the opening of the 12th century, include part of the parish church of St Botolph Billingsgate. The many units of land reclamation are dated by dendrochronology, coins and documents. They have produced thousands of artefacts and several hundred kilos of native and foreign pottery. Much of this artefactual material has been published, but in catalogue form (shoes, knives, horse fittings, dress accessories, textiles, household equipment). Now the context of these finds, their deposition in groups, is laid out for the first time. Highlights of the publication include the first academic analysis and assessment of a 13th- or 14th-century trumpet from Billingsgate, the earliest surviving straight trumpet in Europe; many pilgrim souvenirs; analysis of two drains of the 17th century from which suggestions can be made about use of rooms and spaces within documented buildings; and the proposal that one of the skeletons excavated from St Botolph’s church is John Reynewell, mayor of London in 1426–7 and a notable figure in London’s medieval history. The whole publication encourages students and other researchers of all kinds to conduct further research on any aspect of the sites and their very rich artefactual material, which is held at the Museum of London’s Archaeological Archive. This is a significantly large and varied dataset for the archaeology and history of London in the period 1100 to 1666 which can be continuously interrogated for generations to come.

John Schofield was an archaeologist at the Museum of London from 1974 to 2008. He has written several well-received books on the archaeology of London and of British medieval towns; and as Cathedral Archaeologist for St Paul’s Cathedral, archaeological accounts of the medieval and Wren buildings. ;

Lyn Blackmore is a Senior Ceramics and Finds Specialist who has worked for MOLA and its predecessors since 1986. In 2009–14 she was Assistant Treasurer of the Medieval Pottery Research Group and in 2017 was elected co-editor of its journal Medieval Ceramics, a role she first held in 1989–94. ;

Jacqui Pearce is a Senior Ceramics Specialist with MOLA, focusing especially on medieval and later pottery, on which she has published widely. In 2017 she was elected President of the Society for Post-Medieval Archaeology. ;

Tony Dyson was the principal documentary historian and general editor at the Department of Urban Archaeology of the Museum of London from 1974 to 1998.

‘London's Waterfront, published by Archaeopress… stands out by adding new dimensions to what we know and what we do not yet know about the capital's history... Centered on four neighbouring sites, [the book] tells the story of 16 tenements situated on either side of Medieval London Bridge, including the site of St Botolph Billingsgate parish church. It draws together finds and features, documentary and - for the later period - pictorial sources, presenting the development of the waterfront, including its properties, buildings, lanes and main industries of brewing and dyeing.’ – Märit Gaimster (2019): Current Archaeology #346 ;

‘If ever there was a testament to the complex structure and detailed texture of archaeological strata, and the artefactual evidence contained therein, this book is it. At well over 500 pages, the volume is a substantial and weighty object in its own right. But it is the assemblages of objects and structures described within that are truly to be marvelled at.’ – Matt Edgeworth (2019): Archaeological Journal, DOI: 10.1080/00665983.2019.1600849 ;

‘This is a beautifully produced book with many very fine photos and plans. Schofield and his collaborators have produced an excellent book, which should be used by many future archaeologists and historians (and, geoarchaeologists) to carry out more detailed studies of the London waterfront, and how it evolved over the last 2000 years.’ – Tim Tatton-Brown: The Antiquaries Journal DOI: 10.1017/S0003581519000441 ;

'In print and digitally, the book is both a major contribution to the archaeology of London and a rich source of material, methodological approaches and ideas for archaeologists and historians elsewhere in Britain and north-western Europe.' – Brian Ayers (2019): Transactions of the London and Middlesex Archaeological Society