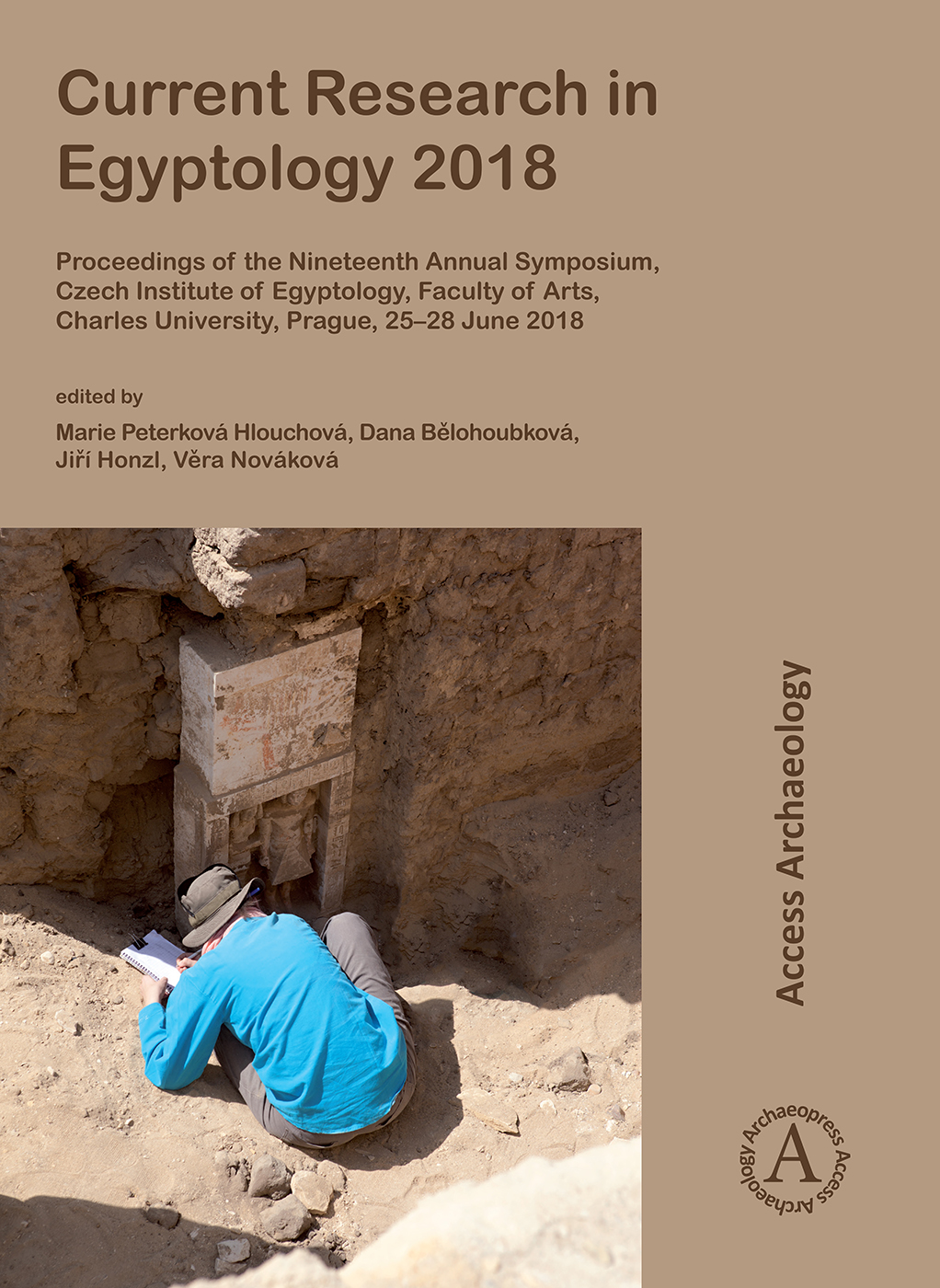 Illustrated throughout in colour and black & white (104 colour pages)

Current Research in Egyptology 2018 is a collection of papers and posters presented at the nineteenth symposium of the prestigious international student conference, held at the Faculty of Arts, Charles University in Prague on 25th–28th June 2018.

Current Research in Egyptology 2018 is a collection of papers and posters presented at the nineteenth symposium of the prestigious international student conference, held at the Faculty of Arts, Charles University in Prague on 25th–28th June 2018. The Prague conference was attended by more than 100 people from various countries and institutions. The range of topics discussed was wide, covering all periods of ancient Egyptian and Nubian history and various topics concerning their society, religious life, material culture and archaeological excavations. The event also included six keynote lectures by experts from the Czech Institute of Egyptology, the FA CU (Prof. Mgr. Miroslav Bárta, Dr., Doc. PhDr. Hana Vymazalová, Ph.D., Doc. PhDr. Jana Mynářová, Ph.D., Prof. PhDr. Ladislav Bareš, CSc., and PhDr. Filip Coppens, Ph.D.) and the University of Vienna (Ao. Univ.-Prof. Dr. Peter-Christian Jánosi). The Egyptological meeting was enriched with a visit to the Karolinum, historical buildings of Charles University.

List of paper presentations
List of poster presentations
Introduction
1. The crew of the sun bark before the first appearance of the Amduat. A new perspective via the Pyramid and Coffin Texts – by Abdelhaleem Awadallah
2. ‘Hail you, Horus jm.j-Cn.wt’. First thoughts on papyrus Leiden I 347 – by Susanne Beck
3. Some thoughts on Nubians in Gebelein region during First Intermediate Period – by Wojciech Ejsmond
4. A few remarks on the persistence of native Egyptian historiolae in Coptic magical texts – by Krisztina Hevesi
5. Under the lion’s shadow. Iconographic evidence of Apedemak in the Meroitic Royal District at Napata – by Francesca Iannarilli, Silvia Callegher, Federica Pancin
6. Brief notes about regional elements of the pottery assemblage from the Byzantine site of Manqabad (Asyut) – by Ilaria Incordino
7. Development of purification scenes in the Graeco-Roman Period. Detecting distinct styles in temple decoration – by Konstantin Ivanov
8. Late dynastic reuse of Theban tombs – by Marta Kaczanowicz
9. The title ‘overseer of the house/estate, the Steward’ during the Old Kingdom – by Věra Nováková
10. A second unpublished version of the so-called Joseph Laporte’s notebook on the French Expedition in Egypt and Syria. Preliminary study and remarks – by Renaud Pietri
11. Being the son of a Goddess. The claim for legitimacy of the Bubastite kings – by Perrine Poiron
12. Time measuring and time units in the kiosk on the roof of the temple of Dendera – by Alexa Rickert
13. Deleterious outcomes of vernacular housing at el-Tarif cemetery – by Rasha Soliman
14. Illustrations of temple rank on 21st dynasty funerary papyri – by Marissa Stevens
15. Lapis lazuli in Sinai and indigenous black copper during the 18th Dynasty – by Kimberley Watt
16. Berenike of the Ptolemies. A Hellenistic desert city/fortress – by Marek Woźniak