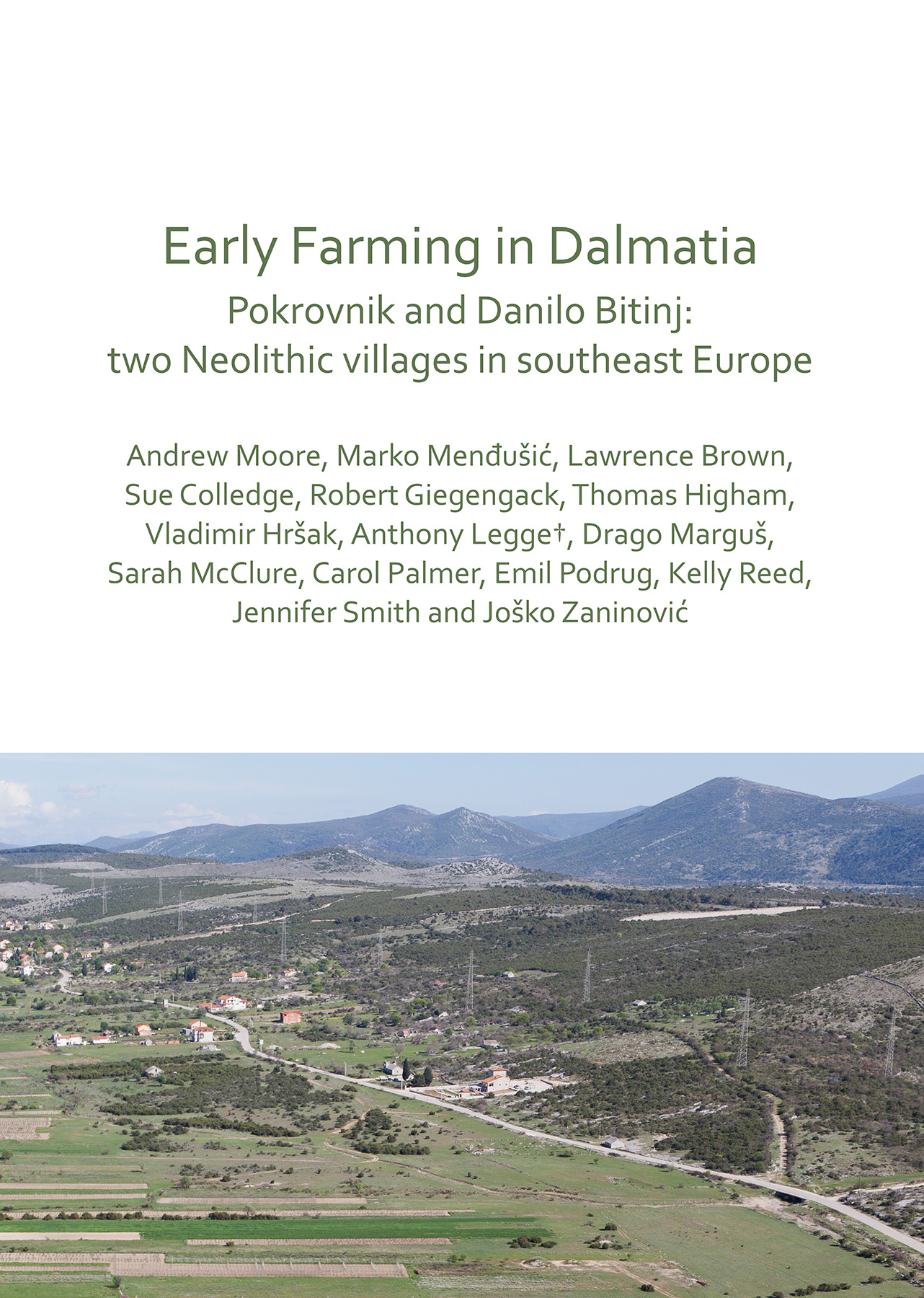 This book investigates the expansion of farming from its centre of origin in western Asia through the Mediterranean into southern Europe. Focussing on Dalmatia, it addresses several key questions, including when and how farming reached the area, what was the nature of this new economy, and what was its impact on the local environment.

Contributions by Lawrence Brown, Sue Colledge, Robert Giegengack, Thomas Higham, Vladimir Hrsak, Anthony Legge†, Drago Margus, Sarah McClure, Carol Palmer, Emil Podrug, Kelly Reed, Jennifer Smith, and Josko Zaninovic. The origins and spread of farming are vital subjects of research, notably because agriculture makes possible our modern world. The Early Farming in Dalmatia Project is investigating the expansion of farming from its centre of origin in western Asia through the Mediterranean into southern Europe. This multidisciplinary ecological project combines comprehensive recovery of archaeological materials through excavation with landscape studies. It addresses several key questions, including when and how farming reached Dalmatia, what was the nature of this new economy, and what was its impact on the local environment. Excavations at Danilo Bitinj and Pokrovnik have demonstrated that their inhabitants were full-time farmers. The two sites were among the largest known Neolithic villages in the eastern Adriatic. A comprehensive program of AMS dating indicates that together they were occupied from c. 8,000 to 6,800 cal BP. Our research has begun to illuminate the details of their farming system, as well as the changes that took place in their way of life through the Neolithic. Their economy was derived from western Asia and it is likely that their ancestors came from there also. It was these people who brought agriculture and village life to the Adriatic and to the rest of the central and western Mediterranean. Once in place, this farming economy persisted in much the same form from the Neolithic down to the present.

ANDREW MOORE’s archaeological interests span the Middle East, the Mediterranean, and Europe. His principal research focus is the beginning of agriculture and sedentary life in the Middle East and their spread to Africa and Eurasia. Moore has conducted field research in Syria, Iraq, Palestine, Croatia and other countries. In the 1970s Moore excavated the site of Abu Hureyra in the Euphrates Valley in Syria threatened by the construction of a new dam. The site was significant because it documented the transition from foraging to farming 13,000 years ago, much earlier than had been suspected. Moore is currently investigating the spread of farming around the Mediterranean and into southern Europe. He is co-director with Marko Mendusic of the Early Farming in Dalmatia Project. The project has demonstrated that agriculture reached the Adriatic region as a mature mixed farming system 8,000 years ago, brought in from farther east by migrating farmers. Moore’s M.A. and D.Phil. degrees are from the University of Oxford. He has taught archaeology at the University of Arizona and Yale University. Past President of the Archaeological Institute of America, Moore is currently Professor and Dean Emeritus at Rochester Institute of Technology. | MARKO MENDUSIC is a prehistoric archaeologist specializing in the Neolithic of Croatia. He was born in the village of Pokrovnik near Sibenik, in a farming family that traces its roots as far back as the seventeenth century. After graduating from the University of Zagreb he became Curator for Archaeology in the Sibenik City Museum and, in time, head of the Archaeological Department there. Mendusic has excavated numerous prehistoric and later sites in northern Dalmatia and on the offshore islands. He has also organized many exhibitions in museums in Croatia. In 2000 Mendusic invited Andrew Moore to join him in developing the Early Farming in Dalmatia Project, and has been co-director of the project since its inception. Mendusic became head of the Conservation Department of the Ministry of Culture in Sibenik in 2004. His responsibilities included preservation of historic buildings in the region at a time of rapidly increasing development. A long-standing member of the Croatian Archaeological Society, his distinguished service as Vice President and in other capacities was honoured with the Don Sime Ljubic Award. Recently retired, Mendusic continues to participate in excavations while maintaining his family’s farming interests.

'A summary chapter on the lifeways of the people of these villages is a thoughtful conclusion to the work. Their economy was based on full-time mixed farming and transhumance, with little dependence on wild foods, and with some trade in goods including obsidian. The likely cycle of the year for these farmers and herders is eloquently described in a way that gives the reader a feeling of having at least a small window of insight into the lives of people in these long-lost cultures. This research should be of interest to anyone studying Neolithic Eurasia.'