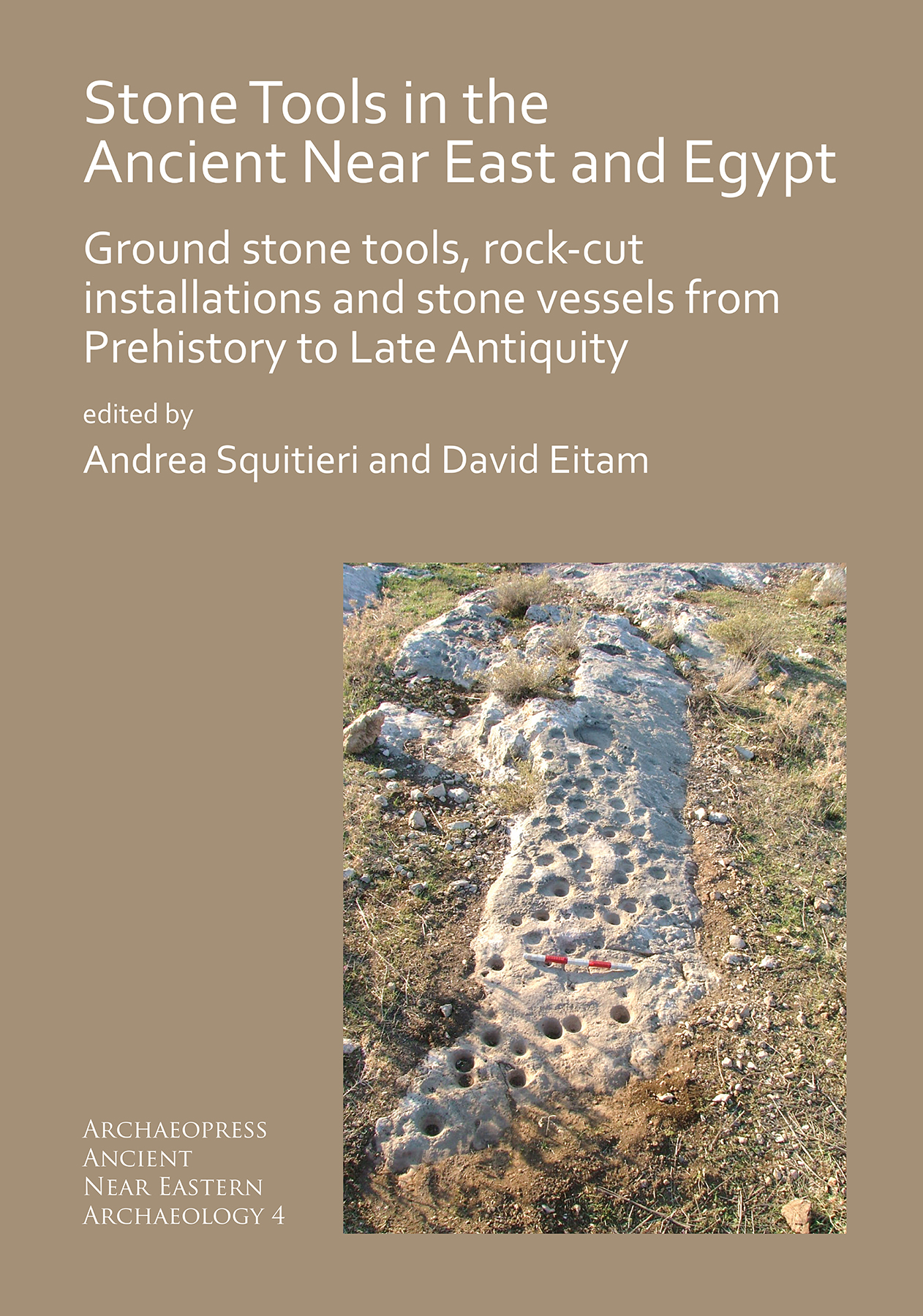 Stone Tools in the Ancient Near East and Egypt

This book focusses on ground stone tools, stone vessels, and devices carved into rock across the Near East and Egypt from prehistory to the later periods. The aim is to explore all aspects of these tools and stimulate a debate about new methodologies to approach this material.

‘Stone Tools in the Ancient Near East and Egypt: Ground stone tools, rock-cut installations and stone vessels from Prehistory to Late Antiquity’ is about groundstone tools, stone vessels, and devices carved into rock throughout the Near East and Egypt from Prehistory to the late periods. These categories of objects have too often been overlooked by archaeologists, despite their frequent occurrence in the archaeological record. Most importantly, a careful study of these tools reveals crucial insights into ancient societies. From the procuring of raw materials to patterns of use and discard, they provide us with a wealth of information about the activities they were involved in and how these activities were organised. These tools reveal patterns in the trade of both raw materials and finished products, inform us about economic aspects of food production and consumption, cast light on industrial activities, help establish intercultural connections, and offer hints about the relationship between sites and their environment. The aim of this book is to explore all aspects of these ubiquitous tools and to stimulate debate about the new methodologies needed to approach this material.

Introduction – by David Eitam and Andrea Squitieri; Methodology and Classification; The archaeology of discard and abandonment: presence and absence in the ground stone assemblage from Early Neolithic Bestansur, Iraqi Kurdistan – by David Mudd; Survey of Rock-Cut Installations at Tel Bareqet (Israel): Food Processor devices in Epipaleolithic, PPNA and the Early Bronze – by David Eitam; Ayn Asil and Elephantine (Egypt): remarks on classification and function of ground stone implements – by Clara Jeuthe; Documentation: Non-Archaeological and Archaeological Sources in Comparison; Mill-songs. The soundscape of collective grinding in the Bronze and Iron Age Near East and eastern Mediterranean – by Luca Bombardieri; Rotary Querns and the Presentation of the Past – by Jennie Ebeling; Bourgul in Talmudic and Classical Literature, and Today – by Rafael Frankel; Wine and oil presses in the Roman to Late Antique Near East and Mediterranean: Balancing textual and archaeological evidence – by Tamara Lewit and Paul Burton; Raw Material and Manufacture; Tool marks on Old Kingdom limestone vessels from Abusir – production of canopic jars and model vessels – by Lucie Jirásková; Raw material variety and acquisition of the EB III ground stone assemblage of Tell es-Safi/Gath (Israel) – by Jeremy A. Beller, Haskel J. Greenfield, Mostafa Fayek, Itzhaq Shai, and Aren M. Maeir; Function and Uses; The ground stone assemblage from the Early Bronze Age I site Wadi Fidan 4: Gender aspects – by Yael Abadi-Reiss, Mohammad Najjar and Thomas E. Levy; Cereal processing in stone agri-technological system at late Natufian Huzuq Musa in the Jordan Valley – by David Eitam; Cuboid-Spheroid Stone Object – an Archaic Scale Weight – Public Weighting-Systems in Iron Age Israel – by David Eitam; Groundstone Tools from Site 35 – an Early Iron Age Copper Smelting Site in the Timna Valley (Israel) – by Aaron Greener and Erez Ben-Yosef; The Iron Age stone tool assemblage of Gird-i Bazar, in the Kurdish Autonomous Region of Iraq – by Andrea Squitieri; Sites and Tools; Macrolithics and the on-going use of stone tools in Qantir-Piramesse and Tell el-Dabʿa-Avaris, Eastern Delta/Egypt – by Silvia Prell; Millstones, Mortars, and Stone Bowls from Tel Dover and the Southern Levant – by Refael Frankel; Stone Tools of the Iron Age Ein Gev and their Implication. The Japanese Excavation Project – by David Eitam; Selenite (gypsum) from the North Sinai collection: likely function and technology of production – by Joan S. Schneider, David Valentine, Avraham Gabay, and Eliezer D. Oren; The stone tools and vessels from Tel Miqne-Ekron: a report on the Bronze and Iron Ages – by Ianir Milevski; El-Khirba: Food processing and other ground stone tools from a Roman, Abbasid and Mamluk period site near Nes Ziyyona, Israel – by Erez Adama, Uzi ‘Ad and Danny Rosenberg

ANDREA SQUITIERI is a postdoctoral researcher working for the Peshdar Plain Project (based at the Ludwig-Maximilans University of Munich) focusing on the study of the eastern border of the Neo-Assyrian Empire. He obtained his PhD at University College London (UCL) in 2015 with a thesis on ‘Stone vessels in the Near East during the Iron Age and the Persian Period’, published with Archaeopress. | DAVID EITAM is an archaeologist focussing on the study of stone tools and their implications on the prehistory and history of the ancient Near East, such as discovering the oil industry of the Kingdoms of Israel and Philistine Ekron in the Iron Age period, and the first systematic production of bread by the Natufian approximately 12,500 years ago. He obtained his PhD at the Hebrew University in Jerusalem (HUJ) with the thesis ‘Late Epipaleolithic rock-cut installations and ground stones in the Southern Levant’ partly published on PLOS One.