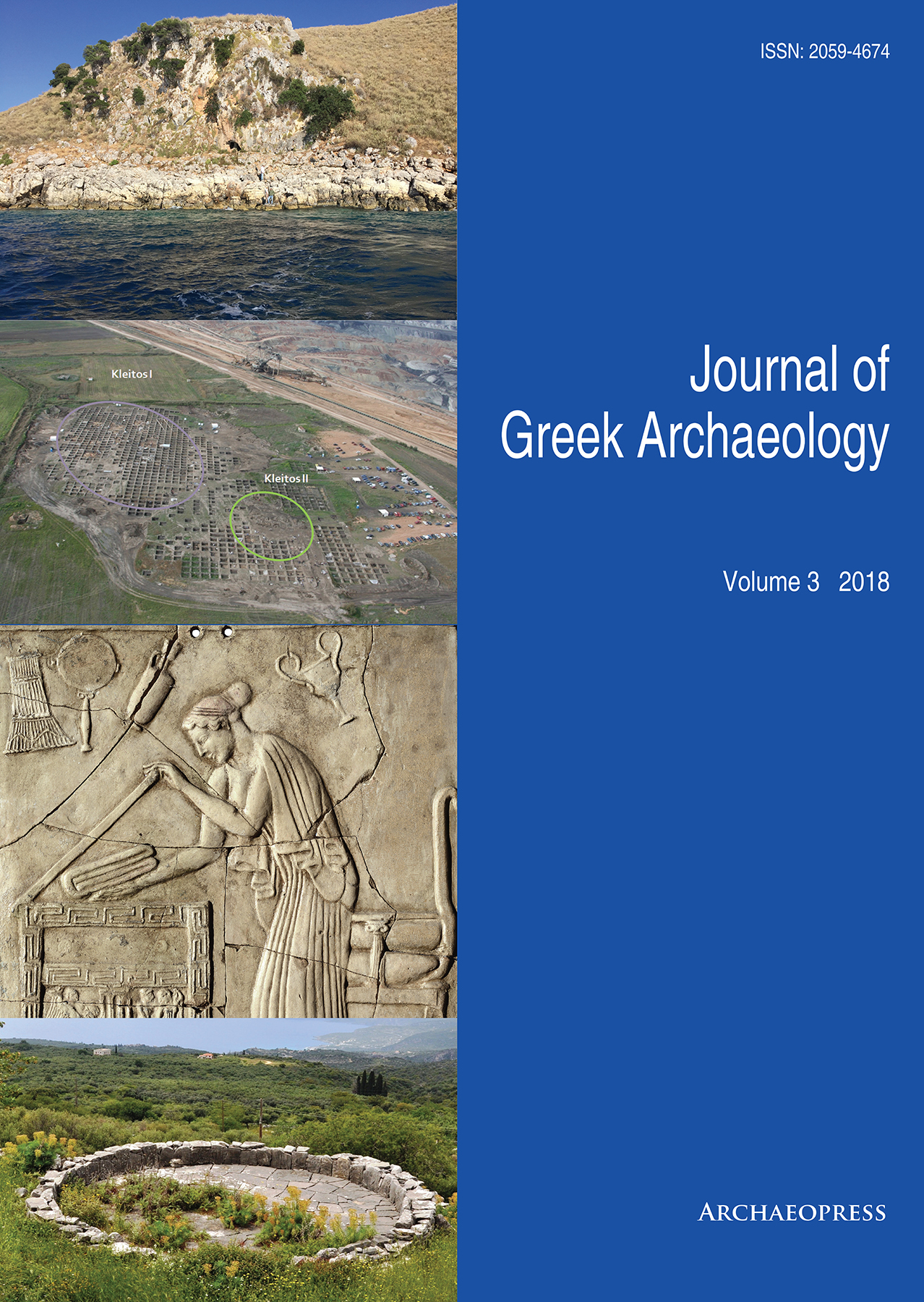 Illustrated throughout in colour and black & white (107 plates in colour)

True to its initial aims, the latest volume of the Journal of Greek Archaeology runs the whole chronological range of Greek Archaeology, while including every kind of material culture. Papers include an overview of a major project investigating Palaeolithic environments, human settlement and other activities in the Ionian Islands. Neolithic industries in large stone artefacts link two papers on the human palaeobiology of populations in the Mycenaean and then Iron Age eras. Two papers on Greeks abroad enlighten us on the nature of Greek presence and impact on indigenous society (and vice versa) in Archaic and Classical Egypt and Southern France. In a totally contrasted fashion, a long article on the fate of Southern Greek cities under Rome offers a very negative but definitively researched analysis on their radical decline. Architecture makes two appearances for the periods that follow, firstly for the towns of Crete under Venetian then Ottoman rule, secondly in the form of Landscape Architecture – the physical infrastructure of rural land use in the unusual landscape of the Mani. Finally, to show that Greek Archaeology knows no boundaries when it comes to material culture, there is a piece on a 21st century fashion designer who has used ancient art to enrich his designs. Alongside these papers, there are articles challenging the accepted view of the Late Bronze ‘Sea Peoples’, shedding welcome light on the neglected later prehistory and protohistory of Epiros, on Greek terracotta figurines and their links to sacrificial offerings, and finally providing a long-term study of the walls of Athens over almost two-and-a-half millennia. The full complement of reviews for almost every period of the Greek Past are also full of fascinating insights and updates.

Journal of Greek Archaeology Volume 3: Editorial – by John Bintliff; PREHISTORY AND PROTOHISTORY; Parting the waters. Middle Palaeolithic archaeology in the central Ionian Sea – by Nena Galanidou; Grinding cereals and pulses in the Neolithic site of Kleitos: an experimental investigation of microconglomerate grinding equipment, final products and use wear – by D. Chondrou, S. M. Valamoti, H. Procopiou, L. Papadopoulou; Making tools, Reconstructing Manufacturing Processes: The Celt Industry of Varemeni Goulon in Northern Greece – by Anna Stroulia; Demography and burial exclusion in Mycenaean Achaia, Greece – by Olivia A. Jones; Diet and Social Divisions in Protohistoric Greece: Integrating Analyses of stable Isotopes and Mortuary Practices – by E. Panagiotopoulou , J. van der Plicht, A. Papathanasiou, S. Voutsaki, S. Katakouta, A. Intzesiloglou and P. Arachoviti; Should I Stay or Should I Go? Mycenaeans, Migration, and Mobility in the Late Bronze Age and Early Iron Age Eastern Mediterranean – by Guy D. Middleton; Should I Stay or Should I Go? Mycenaeans, Migration, and Mobility. Revisiting Bronze and Early Iron Age Central Epirus(Prefecture of Ioannina, Greece) – by Eleni Vasileiou; Aphrodite Pandemos at Naukratis Revisited: The Goddess and her Civic Function in the Context of an Archaic Emporion – by Megan J. Daniels; ARCHAIC TO CLASSICAL; The Greeks West of the Rhone (F). Genesis, Evolution and End of a Greek Area – by Daniela Ugolini; Locating Lost Gifts: Terracotta Figurines as Evidence for Ephemeral Offerings – by Theodora Kopestonsky; ROMAN AND LATE ROMAN; Urban Networks in the Roman Province of Achaia. (Peloponnese, Central Greece, Epirus and Thessaly) – by Michalis Karambinis; MEDIEVAL AND POST-MEDIEVAL; Religious Architecture in Crete: Materiality and Identities between the Venetian and the Ottoman Rule – by M. Lorenzon; Mapping Agro-Pastoral Infrastructure in the Post-Medieval Landscape of Maniot Settlements:The Case-Study of Agios Nikon (ex. Poliana), Messenia – by Sophia Germanidou; From an Intangible Idea of a Fashion Collection to an Intangible Digital Future. A Yannis Tseklenis Vase Look Dress – by Ropertos Georgiou, Avgoustinos Avgousti, Noly Moyssi, Ropertos Georgiou and Avgoustinos Avgousti; MULTIPERIOD; The City Walls of Athens (5th c. BC – 18th c. AD): a Contemporary Approach – by Ourania Vizyinou; BOOK REVIEWS; 34 book reviews divided under the following headings: Prehistory and Protohistory; Archaic to Classical; Hellenistic; Roman; Medieval; Post-Medieval to Modern; Multiperiod