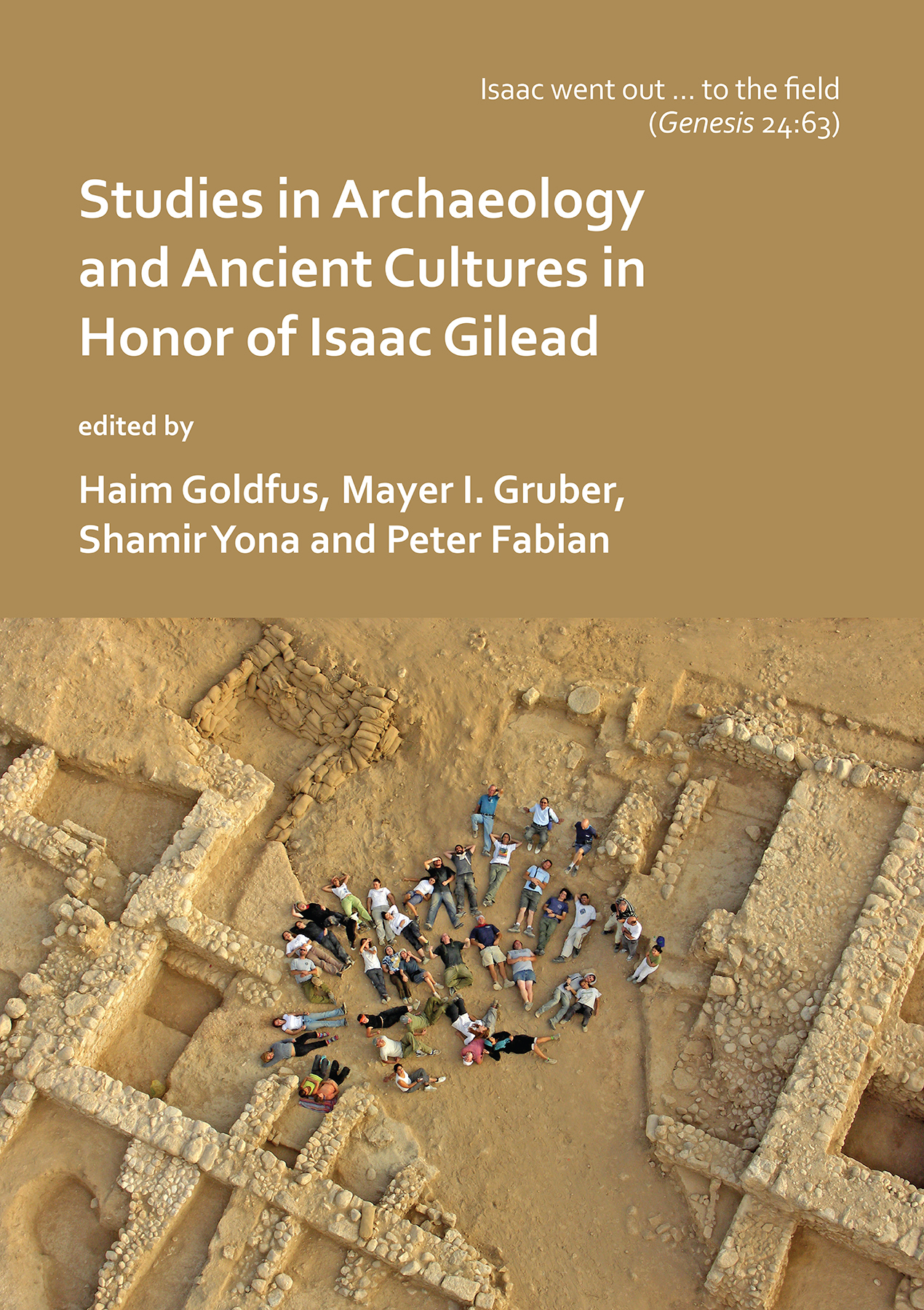 Illustrated throughout in black & white with 6 colour plates.

‘Isaac went out to the field’: Studies in Archaeology and Ancient Cultures in Honor of Isaac Gilead

‘Isaac went out to the field (Genesis 24:63)’ presents 28 articles honouring Professor Isaac Gilead on his 71st birthday. Papers on prehistoric and proto-historic archaeology reflect the focus of the honoree’s teaching and research, while other subjects including Biblical and Near Eastern studies explore Gilead’s other areas of interest.

‘Isaac went out to the field (Genesis 24:63)’ is a collection of 28 articles by 47 authors from research institutions in Israel and around the world honoring Professor Isaac Gilead on the occasion of his 71st birthday. The authors include the honoree’s mentors, colleagues, and students. Most of the articles deal with archaeological subjects, especially prehistoric and proto-historic archaeology, which are the focus of the honoree’s teaching and research. Reflecting the broad horizons of Gilead’s interests, the volume also includes studies in other subjects including the Bible and the ancient Near East, Second Temple literature, the history of biblical exegesis, and the influence of the Bible on contemporary Hebrew Literature.

List of Figures and Tables; Authors’ and Editors’ Biographies; Preface and Acknowledgments; Isaac Gilead: An Appreciation – by The Editors; The Religious Dimension of Copper Metallurgy in the Southern Levant – by Nissim Amzallag; Neolithic Cult Sites in the Southern Negev, Israel – by Uzi Avner, Moti Shem-Tov, Lior Enmar, Gideon Ragolski, Rachamim Shem-Tov, and Omry Barzilai; A Basket-Handled Teapot from Fazael – by Shay Bar; The Contributions of Early French Scholars to Levantine Prehistory – by Ofer Bar-Yosef and François Valla; The Riddle of the ‘Aurignacian’ in the Negev: The Lithic Assemblage from Nahal Neqarot in the Central Negev, Israel – by Anna Belfer-Cohen and A. Nigel Goring-Morris; Forging a Link: Evidence for a ‘Lost Horizon’ – The Late Chalcolithic to EB 1 Transition in the Southern Levant – by Eliot Braun; Unresolved Pottery Neolithic Chrono-Stratigraphic and Chrono-Cultural issues: Comments on the Beginning and the End of the Pottery Neolithic Period – by Avi Gopher; Going Through Customs: Changing Rituals of the Ghassulian Culture of the Southern Levant, ca. 4500-3900 BC – by Milena Gošić; Animal Offerings from the Nawamis Fields and Coeval Habitation Sites in Southern Sinai – by Liora Kolska Horwitz; An Early Pottery Neolithic (Jericho IX) Site East of Tel Nagila – by Hamoudi Khalaily, Anastasia Shapiro and Ofer Marder; Clothes Maketh (Hu)Man: Textile Production in the Southern Levant in the Chalcolithic Period – by Janet Levy; Stylistic Devices and Exegetical Techniques in ‘Rewritten Bible’ Compositions – by Atar Livneh; Conus Ornaments from Tel Bareqet in an Early Bronze Age Near East Context – by Daniella E. Bar-Yosef Mayer, Sarit Paz and Yitzhak Paz; Flint Knapping in a Brush Hut: A Case Study from Ohalo II, a 23000 Year-old Camp in the Sea of Galilee – by Dani Nadel, Daniel Kaufman, Udi Grinburg and Dan Malkinson; Middle Palaeolithic Humans in the Levant: An Archaeological Perspective – by Avraham Ronen; The Time-Space Discontinuum: Scale in the Geography and Chronology of Negev Archaeology – by Steven A. Rosen; The Incised Flint Assemblage from Neolithic Beisamoun and its Significance – by Danny Rosenberg; Ceramic Connections and Regional Entities: The Petrography of Late Chalcolithic Pottery from Sites in the Galilee (Israel) – by Dina Shalem, Anat Cohen-Weinberger, Bernardo Gandulla and Ianir Milevski; Communal Bison Hunting in Western North America: Current Understandings and Unresolved Issues – by John D. Speth; Job 40:30-31 and the First Whalers – by Oded Tammuz; More on Early Natufian Building 131 at Eynan (Ain Mallaha), Israel – by François R. Valla; Hatrurim Quarry – A Newly Discovered Production Site of Larnite Bifacial Tools – by Jacob Vardi; The Origin of the Hebrew Word ṣîṣit ‘Fringe’ – by Allan Witztum, Avi Gold and Mayer I. Gruber; Tel Erani – Reassessing Old Published Records – by Yuval Yekutieli; ‘Isaac went out to meditate in the field’ (Genesis 24:63) in the Exegesis of Philo of Alexandria and Naphtali Zvi Yehuda Berlin – by Elad Filler; The Nahal Zippori Horizon, Between the Lodian and Wadi Rabah Cultures – by Nimrod Getzov, Ianir Milevski and Hamoudi Khalaily; ‘In Green Pastures’ [bi-ne’ot deshshe]: Psalm 23 and Song of Songs 5 in the Poetry of Agi Mishol – by Eran Viezel; The Varieties of Vengeance in the Book of Jeremiah – by Shamir Yona and Rafael Furman