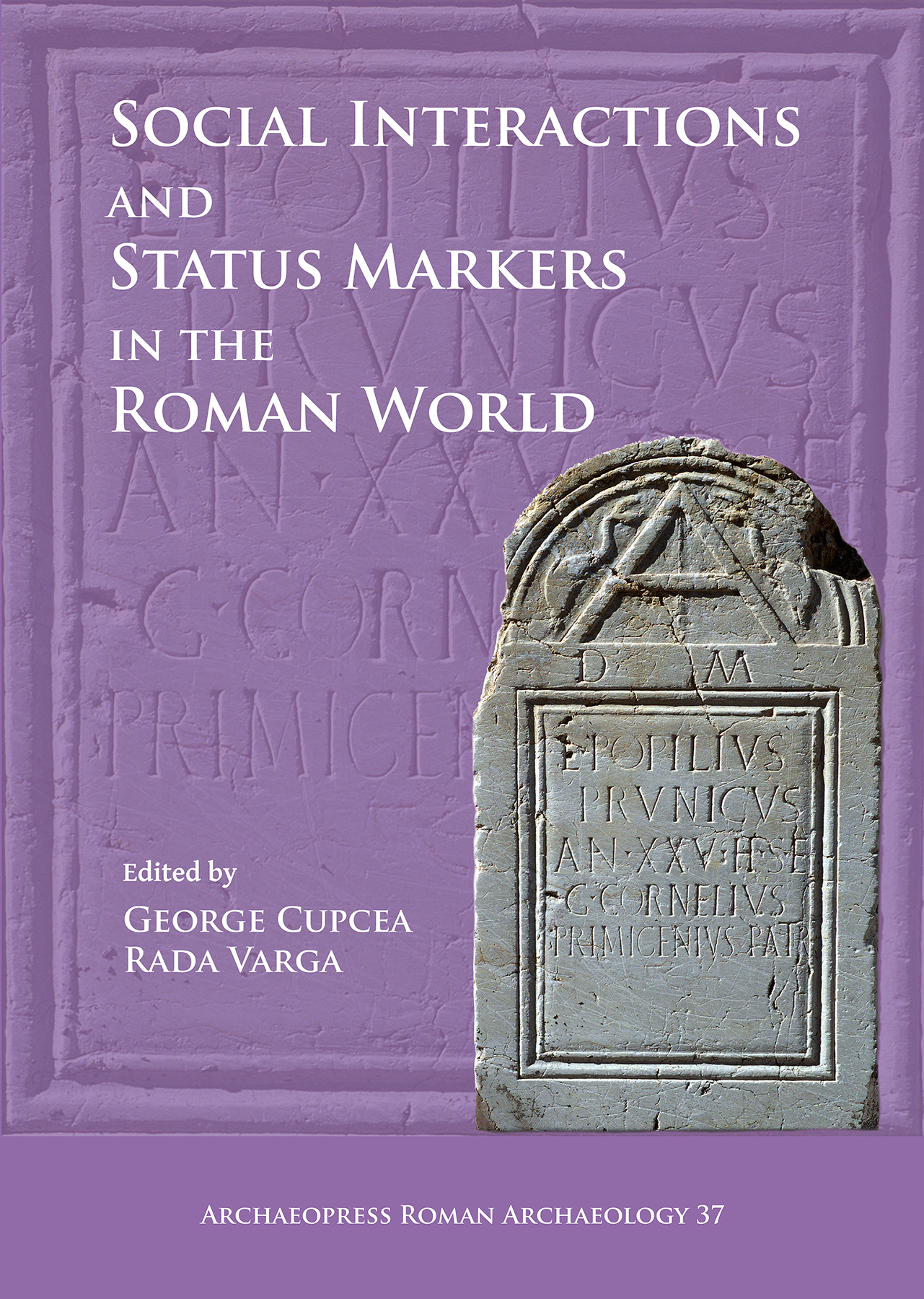 Illustrated throughout in colour and black & white (21 plates in colour)

Social Interactions and Status Markers in the Roman World

Proceedings from the ‘People of the Ancient World’ conference held in Cluj-Napoca, Romania in 2016. Ten papers encompass diverse approaches to Roman provincial populations and the corresponding case-studies highlight the multi-faceted character of Roman society.

In 2016, in Cluj-Napoca, Romania, some forty scholars from around the world attended the People of the Ancient World conference. This was organized within the framework of the Romans 1 by 1 project, and its main focus was on improving knowledge on ancient populations, employing a variety of methodologies, tools and research techniques. The presentations provided the editors with ten papers to be further developed and reunited under these covers. They encompass diverse approaches to Roman provincial populations and the corresponding case-studies highlight the multi-faceted character of Roman society. The volume takes four main directions: prosopography (from Italy to Spain); ancient professions and professionals (merchants in Noricum, Lower Moesia, general nomenclature and encoding of professions, associations and family life); onomastics and origins, and finally, the military (iconography of funerary monunments and centurions’ social life). The publication is intended, on one hand, to enhance knowledge of the diversity of Roman social standings, of the exhibited social markers and – perhaps most important – stress the variety of forms which express status and place within the community, and on the other, to reiterate a series of fresh, modern views on these matters, resulting from a gathering of mostly junior researchers.

Foreword; The Barbii, trade in Noricum and the influence of the local epigraphic habit on status display – by Markus Zimmermann; The professionals of the Latin West – by Rada Varga; Latin Occupational Titles in Roman Textile Trade – by Iulia Dumitrache; The professions of private slaves and freedmen in Moesia Inferior – by Lucrețiu Mihăilescu-Bîrliba; Prosopography of the Leading Families of Larinum in the Roman period – by Elizabeth C. Robinson; The kindred dimension of the Black Sea associations: between fictive and real meaning – by Pázsint Annamária – Izabella; Tarraco. Town and society in a 2nd century AD Roman provincial capital – by Diana Gorostidi, Ricardo Mar and Joaquín Ruiz de Arbulo; Soldiers and their monuments for posterity. Manifestations of martial identity in the funerary iconography of Roman Dacia – by Monica Gui, Dávid Petruț; Origo as identity factor in Roman epitaphs – by Tibor Grüll; Centurions: Military or Social Elite? – by George Cupcea

GEORGE CUPCEA is a researcher at the National History Museum of Transylvania and Babeș-Bolyai University of Cluj-Napoca, Romania. His interests lie in the field of Latin epigraphy, Roman military history, especially the hierarchy of the Roman army. He also specialises in Roman provincial archaeology, especially non-invasive techniques and he is working on the enlistment process of the Dacian frontier in the UNESCO World Heritage List, as part of the trans-national FRE site; RADA VARGA is a researcher at Babeș-Bolyai University, Cluj-Napoca, Romania, and specialises on digital epigraphy, ancient population studies, Roman occupations and professions. She is the coordinator of the project that hosted the conference (http://romans1by1.com), and also directs the archaeological excavations in the civil settlement of the auxiliary fort of Războieni (Ad Batavos), Dacia.